Las Vegas 2024. Vampires have stolen your blood. Play the card game of your life and win it all back.

Every round you will be dealt 9 cards face-down. The goal of the game is to flip as many cards face-up as possible. There is one Vampire card and 8 value cards ranging from 2 to 9. There is always only one copy in each card on the board. If you flip the Vampire card you lose the round. 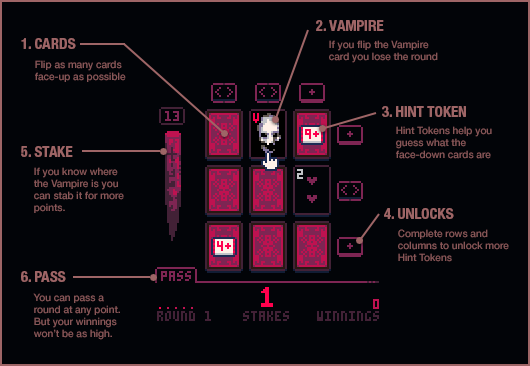 If you think you know where the Vampire card is you can use the Stake to stab it immediately for more points.

You can use the button in the lower left corner to pass a round. You will keep the stakes but you need to pay a penalty of the value of two card flips.

Use the blood you win to unlock opponents with higher payouts. You win the game if your reach 5000ml. Your progress will be saved between matches. But if you lose all your blood your savegame will be wiped and you need to start over.

This game was created as part of the A Game By Its Cover Jam 2020. The goal was to create a game based on of the cartridge covers from the Famicase Exhibition 2020. The cover to High Stakes was created by Tyler Q Anderson and Jamie C Lee. 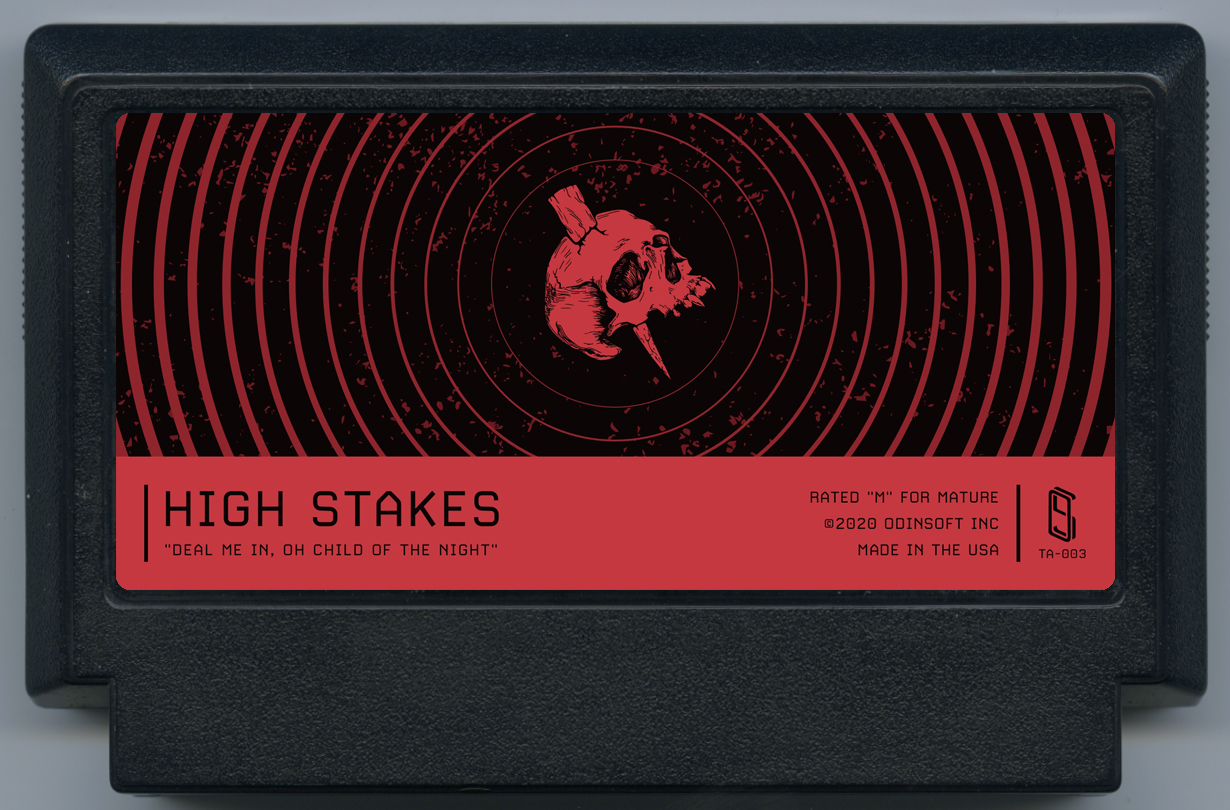 The game was written and designed by Krystian Majewski, an Independent Developer and the host of the Lazy Devs Academy video channel.

The music was composed by Gruber Music.

The game is written entirely in Pico-8.

This was a delight to play! I normally don't mesh with this sort of game, but the information was portrayed well enough that I was able to get into the groove of things very quickly.

Clever how you (I'm guessing) predicted that people would lean hard on the 2x2 token strategy, so you punished it hard. That said, figuring that out made the final opponent much more predictable, so I think it might've helped at the end.

It was interesting to see how some of the tradeoffs you had to make to boost the difficulty, like the vampire placement on the entire board, or how you place the 2x2 token over the most unrevealed cards, ended up making it easier in other ways.

I think that actually ended up making the game more compelling. I keep coming back to this; great job!

Thank you! This is some lovely feedback. I'm glad you enjoyed it.

It doesn't require a lot of strategy, but gambling is addictive so here we are ;)

The definition of luck lmaoo 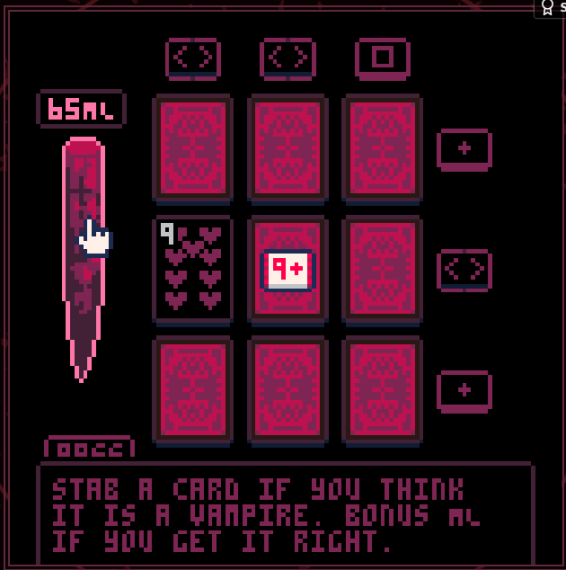 I absolutely love this game! I play it on my free time during school; love to see more!

Definitely not playing while typing this. That would be crazy. There's no way I would be SUCH OF A--nevermind that anyway swell game fellas.

Thank you for playing my game. This was extremely entertaining. I might have ruined my screen a little because I was taking a sip and you got me with the "it's only gambling if you don't know what you're doing" line.

great art and music, and truly does feel like gambling. Just one issue. The token that reveals the 2x2 area the vampire is in is super overpowered. You can go for it everytime and as long you get it you can flip all but 3-4 cards, and after that just pass. This will win you the match 90% of the time

oof！ Finally beat the game after 4 games! Really nice work!, the mechanics the design the story the art the music... loved every bit :)

This game is super frustrating and fun. Good job!

What are you other favourites?

Nice game! I almost quit at the beginning due to lack of interest (lost on after two games or so), but giving it a second try made me become hooked until I finished the game, with much joy.

I think it took me too long to understand the better tradeoff of 'PASS' on a round, which could have made me progress faster instead of underestimating it. I also feel that it took me a bit to fully better understand how to best use the (X+) powerup for higher chances of winning. It's surprising how much strategy there's in the end fur such simple mechanics.

At the same time, I got very close to losing on two occasions: Each time, it was the first game I did on a bigger payout mode, and dew a Vampire on the first or second card reveal in most of the rounds, which felt super unfair and beyond unlucky. I felt that if I had lost the game due to that, I'd have quit the game.

Overall the game is very well done, has a fun quick mechanic, and sets an immersive mood!

Thank you for the detailed feedback. I'm glad you gave it a second chance!

I just draw a bunch of CIRCFILLs, lowering the radius and alternating colors as I go.

any possibility on windows release?

Simple but so hooking. In my opinion the most polished Pico-8 cart ever, finding a perfect balance of visuals, resolution, color palette, while simple, short rounds and addictive!

Any chances for the steam release?

amazing game! love the art, music, style, and the gameplay is really clever. However, I am awful at it and can not win lol. Just spent 30 straight minutes getting DESTROYED. Barely scraped through into the second vampire and lost 5 rounds in a row lol. ugh. I'm gonna keep trying though. I have bad luck

The nice game design with this game is that how much you lose by flipping the vampire is scaled to the numbers of cards you flipped.

So if you only flipped one card and got a Vampire, you got unlucky and only lose a small amount, while if you almost flipped everything, you lose a big amount (which is more likely because you played bad/gambled).

You should try to Pass more often when you're not sure but you're still getting a positive income. And you shouldn‘t flip unecessary cards so the stake Bonus is higher (ex: if you know a card is 2+, you don't need to flip it, you already know it's very low, this way the Stake bonus is higher if you find the Vampire quickly).

but what are you even while in the casino? a pale drained zombielike person or just a skeleton?

also what canonically happens after i won?

Amazing and unique take on the card genre. Really outstanding the amount of work put into this little, tiny game. Loved every second of it!

Wow, thank you for including High Stakes on your list! Gotta check out the other games too!

I keep coming back to this over and over and never get past 30ml. But it's so addicting. I see that there is a third token that shows a 2x2 area, is that not implemented or is that just not available against the first vampire? Because I feel like that would help me so much instead of just guessing.

I think it's unlocked past the 2nd challenge

Cool game. Would be nice to be able to use the mouse, and perhaps a mobile port if a little lengthier

It would be cool to keep a cartridge of High Stakes as a collectable, or even a poster

Hmm. Maybe it the sequel...

dude how is it that addictive

I liked the game a lot. Finished on 4th attempt. It was really fun to figure the game out, but in the end I thought it was a bit too easy.  If you play it right, even if you get really unlucky, you never lose that much.  And when you get a lucky placement, you win big. So the odds are quite stacked in the players favor, if they know how to play.

Thanks for the feedback. Glad to hear you had a good time!

I love this game, but there's no way it's not rigged. I keep getting Vampire cards the first time I flip one, something's rigged against me and I can feel it.

Excellent game. Are you planning to make a mobile version, with touch controls?

You can play the game on mobile already. Just load the website on a Smartphone.

Ahah I know, the most important part of my message was "with touch controls" :p

Well, you can touch the controls at the botton of the screen. ;)

I gotchu. I might do a full mobile port in the future. Just looking for a good framework to do it in.

Cool game
But, as for me, so fast rise of cost for the pass is too cruel. X2 pass cost on the 2-win streak ruins the strategy and brings too much entropy

Just one thing to say.

This is such a good, challenging and exciting game.

Why not make a card game out of it? I would buy it

Keep going cause this game is so enjoyable

When you use the 2x2 square hint, it will always be as unhelpful as possible. In other words, when given the choice, it will always pick the square that eliminates the fewest cards. This means that if something like this happens: 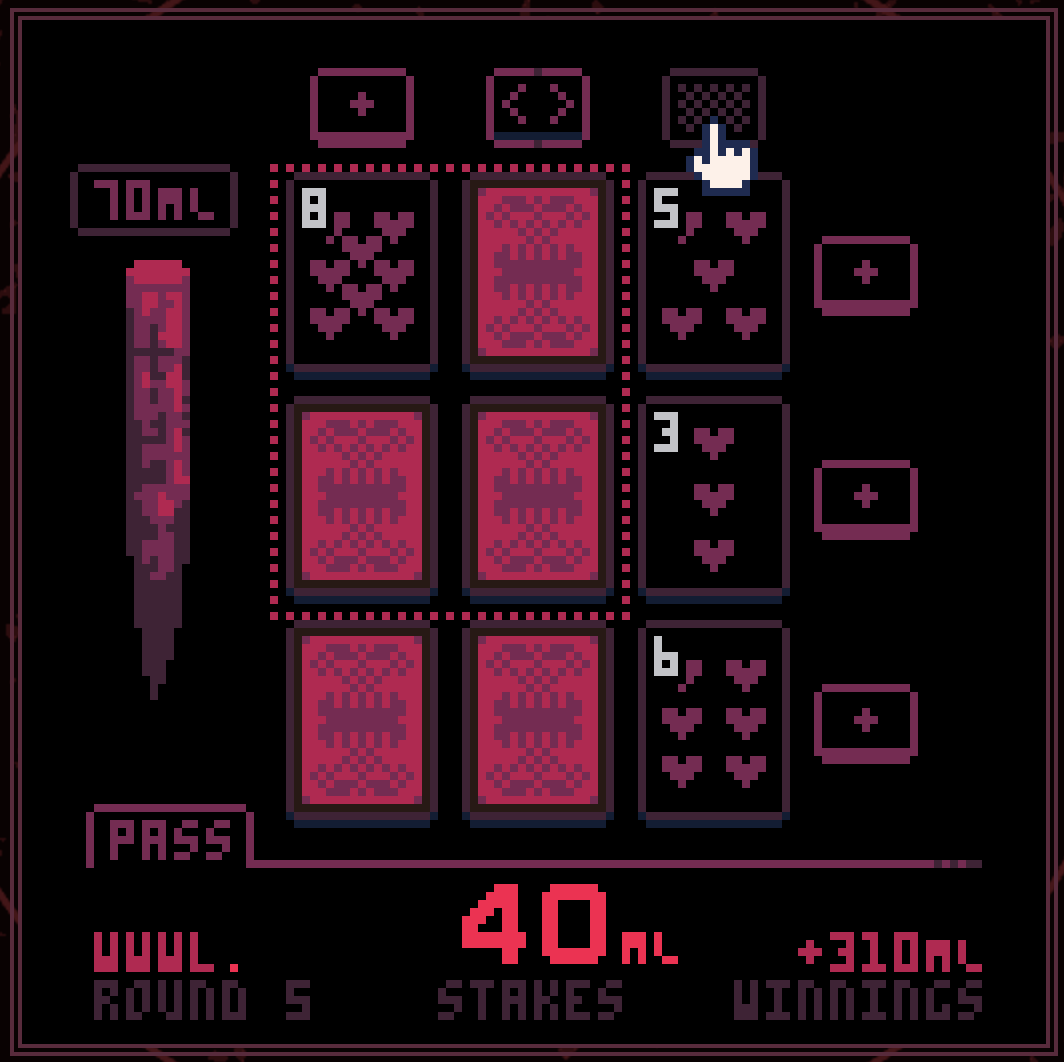 you already know that the vampire's behind the top card, because if it were behind one of the other two, the 2x2 hint would have landed on the bottom, eliminating just 1 card instead of 2 and being less helpful to the player.

Oh that is very clever

After I watched the developer notes and understood the mechanics, it took a few tries on the first and second but I won after that. Very challenging and I love the technics you have to pick up on, which I think you probably did to subtly help towards an understanding of the gambling manipulation on a deeper sense. There is a way to almost ensure a win besides a few chances if you play your cards strategically.

This is good to know. I keep getting vampires on the first or second pick and it feels like there's no strategy, winning is just dumb luck.

I don't think the last guy is worth it, I got him and on the first game and I lost all my blood and had to restart.

maybe I just got unlucky

Great game but It's pretty har